If you walked down the street with Brad Pilon, you’d be surprised by the attention he gets. People turn their heads and look at him. Some may even snap pictures of him but it isn’t because he’s an A list celebrity. It’s because he is at a peak level of fitness that people notice.

He is also the author of an innovative book that was the central focus of his college education. While doing his graduate research at the University of Guelph in Ontario, Canada Brad began to piece together the foundation of what would become the Eat Stop Eat diet program.

This research stemmed from a lifetime of fascination with physical fitness and physique. As a young boy in the 1980s, he became obsessed with the show, “The Incredible Hulk” and the build of Lou Ferrigno. Soon, he realized there were others who maintained the large muscular frame and Brad began to buy issues of Flex and Muscle and Fitness magazine. 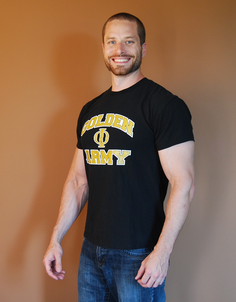 By the age of 14, he made the conscious decision to begin working towards improving his health. He purchased a subscription to American Journal of Clinical Nutrition. As he began to follow the health advice in this publication, he wanted to help promote physical health in the community. When he turned 16, he began to sell supplements to bodybuilders and began to meet with people who were willing to help him to focus on his physical fitness efforts.

He then enrolled at the University of Guelph and focused his studies in Applied Human Nutrition. During his four years at the college he managed to graduate with honors and remains on the Dean’s list. He was quickly recognized as someone in the community that people should notice. He became the target of a supplement company in Toronto who knew they needed to have him on staff as a research analyst.

With his experience with Iovate Health Sciences and Life Science Nutritionals, he would become one of the industry. It would also give him the chance to start meeting with people all over the world. His constant travels and meetings with the company led him to some of the most powerful people in the industry. He met scientists at the scientific conferences and had meetings with multi nutritional food supply companies to discuss sponsoring items and to review the quality of their supplements.

He also had the chance to meet with Mr. Olympia champions, sit down for dinner with Arnold Schwarzenegger and exercise with strong men to learn their unique fitness needs. This gave him the chance to learn more about what these individuals needed from his company and he’d use that information to help build a new line of products that were targeted with specific people in mind.

As he was working with these people, he realized he was seeking far too much time seeking out advice on direction. The reasons was he still had a lot to learn. He decided to go back to school for his advanced degree and began to study things like protein synthesis, leucine and began to work on his graduate project. As he went through this, he focused on learning the latest information researchers had found about how the body works and discovered more about the metabolic effects of short term fasting. This inspired him.

Instead of realizing he knew very little about the human body and giving up, he took a different approach. He began to do extensive research on his own beyond what he was learning in his classes. He wanted to gain more knowledge and to expand on this area. As he did this, he found the information he was being given from people in the industry wasn’t always correct. In most cases, a lot of what he believed he knew to be true wasn’t quite accurate. In turn, many of the facts that were written off as being silly or unproven had over the years been scientifically proven. This led him to begin to change his way of thinking and to look at new ways to incorporate these facts into his research.

As he did this, he pulled away from the resources people had been reusing and rehashing for decades. He turned to scientific journals and modern medicine to gain the insight he needed for this project. By breaking the mold, he began to learn some incredible new information.

By the time he was finished he had enough research and knowledge to write two books and to create two exercise programs. The book Eat Stop Eat is his well most know – see how the diet works here. and the follow up How Much Protein became well respected titles in the industry. His workout programs Anabolic Again and The Adonis Effect have helped people to improve their physical fitness levels. Both focus more on dispelling myths and help people to live healthy, rather than how they believe they need to.

When he isn’t lecturing and giving insight to clients, he continues to make sure people understand the truth about their health. He has worked to dispel the fads of eating more protein, eating six times and even the dangers of eating less. He also has helped people to see that hormones don’t equate as much to their body type as they would like to believe they do.

His passion is for the truth and Brad does all he can to bring new insight to the industry all the time. This is why he has become a trusted face online and people know his name. His efforts speak for themselves as you can see from his strong, lean muscles.

If you want to lose weight and to build muscle mass and live a healthier lifestyle, then Brad Pilon is a name you need to know. He will help you to cut through the mountains of misinformation and outdated facts and help you to learn all you need to know about improving your health. Take a moment to pick up his books or review one of his exercise plans. Both are highly detailed and written in a manner that anyone can fully understand them, regardless of their education level.

Janice Friedman
Previous ArticleHow Should You Exercise and Workout When on The Eat-Stop-Eat Diet?
Next Article What Kinds of Workouts & Exercises are Recommended in the Venus Factor Program?