It Works wraps have become a real craze for losing weight and adjusting your figure. The question is whether or not they actually work.

Below are a real comprehensive information and results to help you make an informed decision as to whether or not you should pursue It Works Wraps, starting with Real Self.

It Works! Has A Great Bottom Line

The body wraps made by the It Works! company are in vogue for people who are looking to get thin, but the question is whether or not they get results.

The company, according to its website, gained 436 percent growth between 2011 and 2014 with more than 50,000 independent distributors across the globe.

There is no question the company has had an impact.

Right now body wraps only have a have a “worth it” rating of 40 percent rating on RealSelf. Even worse, It Works! body wraps have a rating of 37 percent.

Regardless of whether or not its effective, the It Works! wraps are still very popular. Founder Mark Pentecost started the company back in 2001 in Palmetto, Florida. According to Inc., Penetcost’s company earned $538.5 million in 2015.

How Do It Works! Body Wraps Work?

The It Works! wrap, according to the company, is a cloth that is not woven that has a formula that is botanically-based with the goal to give you a more toned body.

You wear it for 45 minutes. It reportedly feels like wearing an Icy Hot bandage. You are supposed to lay down while wearing the body wrap. Some users wear them while sleeping for maximum effect.

You can wear them on your buttocks, your neck and your stomach among other places. In addition to wearing the It Works! wrap, you should maintain proper diet and exercise and keep hydrated. 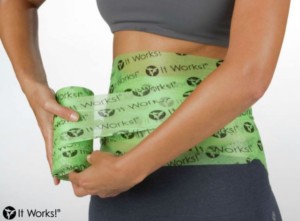 The It Works! wraps costs between $15-25, but there’s other things involved in the treatment aside from the wraps themselves.

You will need your own elastic bandages or the company’s Fab Wraps, as they are necessary for your treatments.

How to Get It Works! Body Wraps

Independent distributors, known by their company as “wrapreneurs,” sign up to sell the body wraps via events, home parties and their personal websites.

The wraps are also sold on the It Works! website. But to finish your order, you still need the name of a distributor. You can likely find one via Facebook.

There is also a loyalty plan available for a $50 fee. You will get wraps delivered to you monthly at $50 instead of $99.

Be mindful though that with this package that there is apparently a cancellation fee of $50.

The reaction on Amazon has not been very good. It has earned a rating of 2.4 stars out of 1,491 reviews on the shopping giant’s website. They also sell what is called the ‘Ultimate Pack’ for $465. You not only get the wraps but also the following:

How To Become A Wrapreneur

To become a “wrapreneur,” mentioned earlier in this piece, you are required to do the following:

There a number of testimonials from people, mostly women, singing the praises about how great being a wrapreneur is.

You can get paid as a wrapreneur from commission and bonuses as well as profits from sales from positive reviews on products.

You can get wraps done for you in spas, but they are more expensive. They can cost between $50-$150 depending on how many areas of your body are being treated.

A positive thing about going to a spa is that a professional is typically more experienced that the person buying the body wraps online and can treat the patient’s specific needs.

The wraps applied by professionals only give temporary results, just like the ones you get delivered to your door.

It should also be noted that the FDA has dismissed the effectiveness of body wraps for weight loss. This is all body wraps, not just It Works! body wraps.

Do Your Due Diligence

The Results Are Only Temporary

The fact of the matter is that the IT Works! body wraps only give temporary results. There is no proof that they can help deliver permanent results for weight loss.

The people at It Works! contend that you will see results after 72 hours before reapplying the wraps.

After you get the results you want, several users assert that you’re able to do what’s known as maintenance wraps every couple of weeks.

The website Body for Wife delivers a very harsh criticism of the It Works! wraps.

Most people don’t use It Works! for weight loss at first. But then desperate times call for desperate measures, despite how silly those measures may sound.

It Works! Body Wraps Are Terrible

The It Works! body wraps promote a social media campaign of #HaveYouTriedThatCrazyWrapThing. The phrase ‘That Crazy Wrap Thing’ is even trademarked.

They don’t say that wrap helps with weight loss, however. Still, they hawk photos that show progress with one’s stomach.

The Fact of The Matter Is…

The fact of the matter is that the price for the It Works! wraps are just way overboard. It’s just way out there.

Another thing that sounds ridiculous, probably because it is, is that for another $8 you can purchase wraps for the wraps.

You gotta get this stuff, because this is your first step in becoming a “Wrapreneur!” Indeed, It Works! is a pyramid scheme, which should not surprise you at all.

An Expert Weighs In

RunwayRiot had a conversation with Dr. Michael Kaplan, a renowned weight loss expert. Kaplan notes that body wraps like the ones produced by It Works! reduce water where people wrap, but the body immediately returns to how it was once he or she starts eating or drinking again. 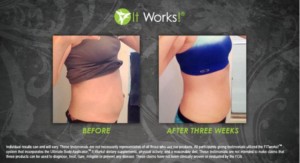 Amanda Hansen of Frisco, Texas, a mother who works as a Wrapreneur, explained how one can have success with the It Works! body wraps.

Hansen noted that the body wraps will work for you so long as your daily habits are healthy. If they are not, you are probably doing things wrong.

She also pointed out that the results will last for about three days so long as those who use it continue to eat healthy and drink water. Although results can vary, results can last as long as 3-6 months.

Kaplan, however suggests that the results don’t last for more than a day and people like bodybuilders just do it in preparation for a competition.

Despite the mixed reviews, Hansen remains a loyal customer, noting it helps with cellulite, stretch marks and has firmed up and tightened her body after having three kids. 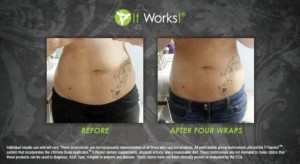 A Time When It Works! Did Not Work

Cheyenne Hernandez, an 18-year-old from Azusa, Calif., was skeptical when she first saw the online before and after photos promoted by It Works!

Still, she gave it a shot buying the $100 package and used them for three months as directed, also eating healthy and exercising in that time.

Hernandez lamented that her skin felt oily, her clothes began to smell and she started to feel tingly and cold for a short time. The problem was she didn’t see the results as advertised in the ‘after’ photos, but instead just smelled like old Vaseline.

Hernandez also observed that the people who speak positively about the It Works! wraps are from the distributors and no one else.

It seems that the It Works! body wraps can help you for a short time, but there are no long term effects. They are also very pricy, so be mindful of that when considering whether or not you want to purchase them. If interested in checking them out for yourself, you can view them on Amazon here. h/t: Body for Wife, Real Self, Runway Riot